The Books of Ember series by Jeanne DuPrau 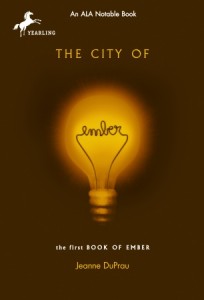 The City of Ember – I enjoyed this first installment in the popular dystopian YA series. It follows two teens, Lina and Doon, as they look for a way to save or escape their dying subterranean city. The story takes place about 200 years after some unspecified disaster forces humans to live underground. To me, this works because that seems the right timespan for survivors to forget what life was like in the world before Ember, to let any possible aboveground radiation die down, and to see the created survival space begin failing. Add in a damaged escape plan from the town’s original founders that the teens must puzzle out and this one is a win. 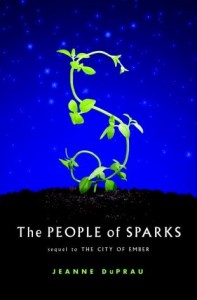 The People of Sparks – This one was a bit less enjoyable, perhaps because all the tensions between the refugees from Ember and the people eking out a life in Sparks seemed quite harsh. I mean, asking a struggling community to take on an extra 400 mouths to feed seems tense at best. Still, although it was difficult to read in parts, I liked this one also. I was just sad to see the people leave Ember, a  far more unique and interesting setting to read about. 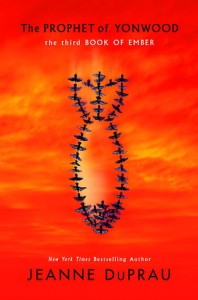 phet of Yonwood – This one was my least favorite as it was only tangentially related to the Ember story and doesn’t completely explain how the people ended up
in the underground city of Ember. Nickie comes to the town of Greenhaven, NC to help her aunt prepare and sell their grandfather’s mansion. Yes, there are enough global issues that let readers imagine what the unnamed disaster that forced the people into Ember underground is (with perhaps a prophecy, however unfounded, that might also make that necessary), and some hints about the founding of Ember itself, but there was not enough direct connection that made this feel like a valid third installment in a series I previously enjoyed.

The Diamond of Darkhold – This one was a great return to our actual protaganoists from Ember, Lina and Doon, who head back into their abandoned city to retrieve much-needed goods for their new home in Sparks. Along the way, they find another secret left behind by the origina 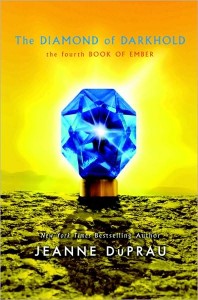 l Builders. I really liked this one as I must say, I’d worried how the folks in the newly combined cities of Ember/Sparks would fare without adequate supplies. Just enough adventure and a whole new mystery to solve make this a great addition to the Ember series. My only complaint is that a couple inconsistencies appeared which troubled me: the letter than Lina threw down right at the feet of Mrs. Murdo in book one could clearly not have been right at her feet (if it was out in the unmapped regions as it seemed it must be as depicted here) and that this underground city seemed to have quite a few more openings to the outside from above than I’d previously envisioned. Wouldn’t that mean SOME light was getting in?  Also, I’m not exactly sure what the Diamond is. A lightbulb? A solar-powered crystal? Some newfangled thing we don’t know about in our time? Overall, though, this is a solid sequel that furthers our story enjoyably and reasonably.

Like Loading...
This entry was posted in Children's, Dystopian, Fiction, Mystery, Young Adult and tagged Jeanne DuPrau, series, The City of Ember, YA. Bookmark the permalink.