In this section, Darcy (and also his cousin Colonel Fitzwilliam) visit Elizabeth and the Collinses at the parsonage. Charlotte wants to believe at first that this is because he is in love with Lizzy, yet none of his behavior — overall very abrupt, silent, and stare-y – can convince her of this. Charlotte even believes that if Lizzy knew it, she’d instantly start liking him back “if she could suppose him in her power.” Hmm, very telling that Elizabeth’s very best friend, a shrewd and overly practical woman, would believe this to be the case. Interestingly enough, just as Lizzy disapproved of Charlotte’s marriage to Mr. Collins, Charlotte prefers Colonel Fitzwilliam for Elizabeth. What is it with all the people in this book trying to fix/unfix each other up? Reminds me of middle school!

Elizabeth, oblivious, continues to walk in the park separating the big house at Rosings and Charlotte’s cottage. In doing so, she repeatedly stumbles upon Darcy along the exact same walk…even though they both find it a little difficult to make conversation. He implies that the next time she is in Kent she’ll be staying at the big house and his cousin lets slip that he keeps delaying their departure ….and thus his intentions become clear to everyone but our heroine. And yes, Lizzy, sometimes you are a dolt!

In the same vein, Lizzy unwittingly stumbles upon uncomfortable subjects of conversation during her walks with the gentlemen including the difficult behavior of Miss Darcy (the ward of Col. Fitz and Darcy) AND the true reason Bingley left Netherfield. Not realizing that Lizzy’s sister Jane is the subject of their conversation, Fitzwilliam sorta, not really, accidentally reveals that Darcy persuaded Bingley to leave to ensure he did not marry Jane.

Elizabeth is shocked but not surprised by this news and feigns a headache to avoid confronting Darcy. Undeterred, he comes to the parsonage specifically to confront her with the most atrocious, insulting marriage proposal ever. After outright ignoring her for several long moments, he then tells her how much he wished he didn’t like her but has found he does and begrudgingly, it seems, demands she marry him. And honestly, as much as I get Darcy’s behavior here, this is nearly unforgivable.

By the by, I stumbled upon this Sparknotes/Blogging P&P as a teen novel site when I was playing around in internetland and it has been keeping me up at night. Here’s their graphic for the Darcy proposal: 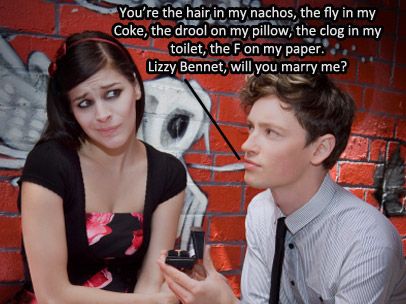 So, anyway, Elizabeth reminds Darcy that she thinks he is lower than a slug and that she can never forgive him because he screwed up Jane’s love life. He scoffs and tells her that their breakup was like his greatest personal triumph or something and that he wishes he had been so kind as to put himself off her as easily as he got Bingley away from Jane. (At this point I make squinty, mean, glaring eyes at him. Not cool, Darcy.) Lizzy then stoops fairly low herself and reminds him that he has likewise wronged her other boyfriend, Mr. Wickham. This all sounds fairly middle-school angsty again, and I could respect her more if she’d never brought this up.

Nah, he says, you’re just ticked because I told you I never wanted to like you and that I hate your family. She tries to one-up his insulting comments by telling him she hates him and can’t think of anyone else she’d rather marry. For once, her words seem to pierce his pride and he starts to get that he hasn’t acted as gentlemanly as he pretends. He storms out and she reflects on how easily she has rejected his suit, but then runs up to (cry in?) her room. Interesting…

Darcy and Elizabeth spend the next day again wandering outside (because, seriously, what else is there to do in the countryside for five weeks?) and he gives her THE letter. This is the letter which proves Darcy, while certainly proud, actually has a soul; he just has no social skills and therefore presents his thoughts best in writing. At first he IMMEDIATELY reassures her he won’t ask her to marry him again. I can’t decide if this is really respectful of Lizzy’s feelings or another dig at how inappropriate she is…

Anyhow, Darcy’s letter explains that his friend Bingley is OFTEN in love. Since Jane seemed unattached, Darcy thought there was time to get Bingley safely away from her admittedly distasteful connections (even EB would have to admit THAT much). And since they’d only been seeing each other a few weeks, and B was willingly led away, and Jane wasn’t really attached anyway, it didn’t seem a serious problem. That sounds…surprisingly reasonable-ish. Darcy also seems like the type of guy who is OFTEN making decisions for others (Bingley, his sister, etc.), so this is not out of character for him…what is surprising is that he wouldn’t have acted MORE strongly to separate Jane and Bingley if he thought the man’s sisters were ALSO displeased with Jane’s influence. He goes on about how he views the Wickham dissolution much more seriously since it was a family connection and one which had existed for far longer. Damn you Darcy! Again, here you go with the reasonable when I’m trying to hate you. He also gets in another biting remark, which is also inexplicably quite touching:  “I was not master of myself enough” because she rejected him…aw. I’m having a hard time NOT liking him at this point and I’m getting seriously irritated at Elizabeth.

Then we get the “was I wrong? Was I right?” saga of indecision that is Lizzy’s prejudice and again, Darcy’s pride. Except it seems now that Lizzy has for the first time realized and admitted this weakness in herself: “Pleased with the preference of one, and offended by the neglect of the other, on the very beginning of our acquaintance…Till this moment I have never known myself.” Lizzy has been wrong in liking Wickham, hating Darcy, and deluding herself in both areas AND she just NOW realizes this…it’s no wonder that Mr. Collins liked her; right now, she is as self-absorbed as he is! And I just CANNOT get over how fickle and jerky she seems here!

Anyway, Lizzy picks up Jane so they can head home; eventually she also spills the beans about Wickham but leaves the knowledge of Bingley’s departure and Darcy’s involvement to herself. This seems conveniently selfish; after all, doesn’t Jane have a right to know about her own love life, even if the details are hurtful? Together, they decide the rest of the world should be spared the truth about Wickham because it might make him “desperate.” Excuse me, WTF???  This I-will-make-decisions-for-everyone-around-me-without-any-regard-whatsoever-to-their-feelings attitude is kinda what gets Darcy in trouble with Lizzy, right? That’s surely got to bite SOMEONE in the ass before long.