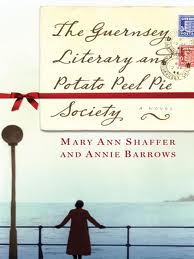 This wasn’t a bad book, but it wasn’t stellar enough to be the recent choice of BOTH of my book clubs either. First off, let’s talk about that mouthful of a title. Here’s how the thought-stream goes in my head every single time I read that title…

Guernsey (That makes me think of cows…and that cows chew their cud. What, may I ask, is cud?). Literary (yay! books!). Potato (yum, I’m hungry. Wonder if I could con the hubby into making me a baked potato?). Peel (Huh? Potato peels? That just sounds like garbage you throw away. Wait, maybe cud is garbage scraps you feed to cows). Pie (Pie? Potato pie? Hmm, is that like potato pancakes or potato bread which sound good in theory but, wait…That’s potato PEELS in a pie. Ew, that’s not the tasty part of a potato. I’m no longer hungry. Who on earth makes a pie out of COW FEED and GARBAGE?).  It’s just chaos inside my head, I tell you, and all because of that damn title! Ugh. So, anyway, with a book name this long and weird, I needed a more substantial reason for it, and quite frankly, more in-jokes that reference its absurdity. The literary society itself gets explained very rationally early on with some soldiers, a hidden pig, and a drunk man posing as a British nobleman. That sounds like it could be very funny actually, yet it isn’t…and the potato peel pie, well, that recipe is just GROSS with all the cow food and garbage and oh, yeah, BEETS and, no matter how you explain it, it’s definitely not funny.

Ok, so this is a war book, and maybe it’s not supposed to be amusing, although sometimes I think it tries to be. Guernsey had a few memorable moments and I did quite like the premise (girl writer gets rid of some books, a boy finds one that belonged to her personal library, he strikes up a correspondence, she is intrigued by his quaintness and his isolated island hometown, etc.), but honestly, I don’t tend to like a novel in the epistolary style. Letter-novels feel forced somehow and I tend to feel that I’m hearing only the “good parts” that the letter writing character finds significant enough to include. Bleh.

Seriously, the epistolary setup lacks some of the psychological nuances and character developments I relish when reading fiction. As a result, the plot points have a tacked-on feel and I just don’t get to care about the characters as much as I’d like. I mean, think about it, letters all end up sounding mundane unless they deal with real occurrences in the lives of those you care about, don’t you think? It doesn’t work for novels, since we don’t KNOW the people involved personally, which makes the story feel forced. After all, who wants to read about someone’s daily routines?…”Dear Sally, I just have to tell you about my day. First, I went to the market, but they didn’t have the turnip roots I needed, so I couldn’t make Grandma’s famous turnip and cabbage soup. I ended up stopping by the butcher shop, and there was a special on beef livers, so I guess it’s a liver and onions night. While I was walking home, I stubbed my toe on a rock and it bled something fierce…” WHO CARES! NO ONE WANTS TO READ LETTERS THAT AREN’T ABOUT EXCITING EVENTS OR PEOPLE THEY KNOW. There is a reason the epistolary novel went out of style and it wasn’t email or Facebook, I promise you. These books seem like a lazy author’s shortcut to developing actual scenes and characters a reader identifies with.

Also, this is a book with two authors. (Didn’t either of these ladies feel that the plot dragged a bit because of the letter-based format? No? Apparently letter-novels are only MY particular hang-up.) I’m not entirely sure who did which part of the writing, or if one was a ghostwriter or one wrote one set of letters or what, but I felt the work lacked the creative spark I’d expect in a collaborative work (The most recent good one I’ve read was Will Grayson, Will Grayson by John Green and David Levithan, btw). It seems that while two heads may be better than one, two writer’s imaginations don’t actually add up to twice the fun in this novel. There is nothing overtly wrong here, but the writing sometimes felt stale, repetitive and didn’t seem to progress the plot or characters enough. (I mean, why couldn’t Sidney have been a love interest as I was led to believe for half the book, and then, when three-quarters of the way through he suddenly becomes gay, why does it have to be mentioned three times???)

All that said, I felt that the Guernsey story was worth reading about on an intellectual level as I had never considered how the inhabitants of the rest of the British Isles fared during World War II. In fact, I’ve rarely heard about any Allied experiences outside the somewhat isolated ones you hear about London. I guess I’d have to give this book a C…an easy read for sure, but not keep-you-up-at-night good.

Like Loading...
This entry was posted in book club reads, Fiction, Historical Fiction and tagged epistolary, Guernsey. Bookmark the permalink.