So, this weird little novella revolves around Coraline (why the heck is that not Caroline, btw?) who notices there is something weird going on across from her apartment through a tiny door and corridor. But 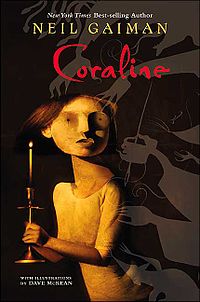 the tiny door is bricked up, and only Coraline can see the shadelike things slipping under it, so she must explore this mirror world. All in all, this seems to be the key feature of Coraline’s personality: she likes to explore. Well, that and she doesn’t like recipes.

I guess this is technically a children’s book, as it seems aimed at upper elementary schoolers, but somehow too adult for them as well. I mean…ew. Just ew. If I’d read this as a kid, I’d have nightmares still! Sewn-on, black buttons for eyes, a creepy, windblown thing that eats bugs and hacks up keys and kidnaps children, and a solo quest the girl must complete to rescue the spirits of dead children the witchy lady kidnapped before? Man, I might have nightmares NOW.

Some parts of the story felt familiar, like a modern retelling of every scary story ever told to children, and yet some parts felt strikingly original. For instance, Coraline, knowing that an escape from this parallel world will eventually become necessary, calmly investigates the boundaries of the “other” world, even beyond the portions that are well “drawn” and into the areas that are just meant for vague and colorful background filler. Beyond the vividly created bits of the “other” landscape lies a swirling, nebulous “mist” meant to be seen only from afar which inexplicably delivers her back exactly where she’d started. Her talking cat companion (a hoot, btw) rather facetiously mentions that this means she has walked around the entire world, but she takes it in stride. While in the mirror world, Coraline is confronted by all sorts of people who seem to be nightmare versions of those she already knows. This includes her “other father” who seems oddly constructed of glittery buttons, old wine, and disintegrating bread dough, but he is merely a mushy pawn being controlled by the main baddie, the beldam, or “other mother.”

Coraline wasn’t a page-turner, and yet, I never really wanted consciously to stop reading it. I mean, I was able to leave it and go to other things while still abstractly wondering how little Coraline was doing off in “Other” Land. Still, I don’t think I’d recommend it to my kids as it is quite dark, although I definitely enjoyed it. I guess the plucky heroine makes up for the gloominess of the work in some respects.

That wide-eyed bravery makes Coraline seem both young and old as she sets off to save her parents from the NOT mother. (I can’t help but wonder why Coraline doesn’t just stay in the created world where she can have at least an illusion of everything she’s ever wanted, because really, what does this child have to go home to even with her real folks? I mean, they ignore her and seem utterly unattached. She goes several whole days, even going grocery shopping on her own, before really questioning their absence, so something tells me this little girl has been alone A LOT.) And yet, she’s got such resolve when she goes off to rescue her parents and into all the scary situations she’s faced with, never complaining or questioning how she ended up there, so I can’t help but root for her. I guess it is this dual childlike/mature nature of Coraline which helps to highlight the hit-me-over-the-head profundity of the novel’s main truism. Here it is, per Coraline:

“I don’t want whatever I want. Nobody does. Not really. What kind of fun would it be if I just got everything I ever wanted? Just like that, and it didn’t mean anything? What then?”

Unfortunately, kids usually just aren’t that self-aware*, which is part of the problem I had with the book. It is, at turns, right on point with childish mentalities and then at others quite removed from them.

I mean, it is so definitely a children’s book, and yet also, not. It seems to struggle a bit with just what it SHOULD be. Is Coraline is an innocent child? A budding adult? A knowing adventurer? Is this book meant for kids? Tweens? Adults? A bildungsroman meant to teach kids how to become adults?

But criticisms aside, I did really like the writing style although I’m not usually a Gaiman fan. To wit, this passage that just seemed so perfectly, absolutely, spot-on regarding a child’s unspoken rationale when facing a scary situation:

“It was so silent that Coraline imagined that she could hear the motes of dust drifting through the air. She found herself to be quite worried that something would jump out at her, so she began to whistle. She thought it might make it harder for things to jump out at her if she was whistling.” (Granted, most children probably wouldn’t realize that they behave this way to cope with fear *see above*). This seems dead-right (and something I might still do if home alone and spooked by noises!) in explaining the behavior if not the child’s logic; after all, bad things don’t tend to come out if you are noisy and sound…un-alone. EVERY kid, no matter how grown-up, knows that!

Anyhow, by suddenly realizing that she’s afraid, as our Coraline of course does, she also all but instantly realizes she ISN’T really scared after all. If only every kid, and most adults, had an ounce of Coraline’s unique mix of gravity and innocence, growing up in the face of scary things might be a whole lot easier. You know, I might just let my kids read this after all…