Petals on the Wind – Still Dusty, Less a Favorite

I remember reading this for the first time as a young teen. I remember being sad because I didn’t like it as much as I expected to. Now, many years later, I totally get why that is…I no longer like Cathy AT ALL. I can no longer empathize with Chris. I find them more icky than intriguing. Is that understandable given the circumstances they face in Book 1 and 2? Eh, I don’t think so. I just don’t. 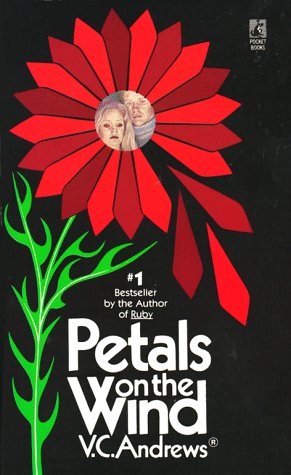 Unbelievable bit 1: Adoption – I was totally bummed that their plans to join the circus after leaving Foxworth Hall were completely derailed within the first twenty pages. I mean, Chris and Cathy really didn’t have to do that to support themselves, but to see them fend for themselves for a while before shacking up with a stranger would have been realistic and nice. And I see that they really needed to get to a doctor fast for Carrie, but it all just plays out as too convenient. Blah.

Unbelievable bit 2: School – Then Chris gets to go to an accelerated college/med school program even though they haven’t been to ACTUAL school in three years. Cathy gets to be the top ballerina in her hick town because she’s just that darn talented even though she didn’t have any formal lessons while in the attic or even before that back in Gladstone! And Carrie places into third grade even though Chris and Cathy spent all of five minutes teaching the twins their letters up in the attic? As far as I can remember, those twins never even learned to read or do basic math, so…yeah right.

Unbelievable bit 3: Sending Carrie away when they should all be sticking together – The child has just been poisoned by her family, lost her twin brother, discovered she is freakishly proportioned, and left the only home she’s ever known…to be sent off to deal with life and her abnormally large head and little body ALONE? Um, Cathy, I’m pretty sure you spent ALL of the last book calling Carrie something akin to “your own daughter” and promising that you’d never let your children be cast aside. Hmm…sounds like you might be like some other mother we know.

Unbelievable bit 4: Carrie’s death – Oh, and weird-headed, insecure Carrie FINALLY gets someone to love her, but then kills herself. This makes no sense. And no one really notices! It isn’t nearly as traumatic as it should be as Carrie has become only a minor character in Cathy’s world of insanity and narcissism. Even Cathy just keeps her icky hair in purple and red bows and hires a babysitter for the kid. She doesn’t even get the two pages of reminiscence Cory does in book one.

Unbelievable bit 5: Cathy’s irresistibility to men – Ahem…how to put this nicely? Cathy totally throws herself at all the men she sees in this book…this includes her brother Chris (which isn’t TOO surprising), her mother’s husband Bart, her dancing partner Julian, and her foster father Paul. I get that our narrator is emotionally damaged and needs love and all that, but really. She encourages relationships with men who are bad for her and then walks out on them at the last minute for another guy. And every time, the men still pine for her. I’m pretty sure there is a nasty name for that type of behavior in a girl. And, I’m pretty sure guys don’t hang around waiting for a girl like that, however pretty and off-her-rocker CRAZY she might be, to do it to them again.

Unbelievable bit 6: Every problem in the history of the world is all Corrine’s fault – I do get the whole need for revenge against the mother and grandmother thing, but that takes such a backseat to all the OTHER stuff Cathy does. This makes no sense of course, but it does show how Cathy is losing her grip on reality. In fact, everything Cathy does wrong is her mother’s fault…okay, up to a point, I see why she’d say this, but then she hasn’t seen her mom in like ten years! After a point, wouldn’t she just have to grow up and take responsibility for her actions, no matter how sucky her parents were? Of course not, because it is working out so well for her this way! Oh, and she’s INSANE.

But still, Julian’s death is her mom’s fault? Her own impulsivity? And the enmity between Paul and Chris, really? Corrine never even met Paul or Julian! In fact, Cathy blaming her mother becomes so laughable I started highlighting those lines that show out of touch with reality she is. For example, she acknowledges:

“I wanted [Chris] with me always–just the nearness of him, the confidence he gave me–nothing else. I was trying to balance my time between Chris and Paul, to give each of them enough, but not too much. I watched the jealousy between them grow, and felt it was none of my fault — only Momma’s! As everything wrong in my life was her fault.” WTH?

Unbelievable bit 7 – The ever so important/unimportant kids and…a picnic hamper – Oh, and did I mention, Cathy’s such an impeccable ballerina she becomes almost famous? But then she puts that off to have children without a second thought? Such a good mother! Well, at least until her child gets in the way of her revenge plan and gets dropped with a nanny or maybe left at the abandoned ballet school (poor Jory!) or becomes her NEXT revenge plan (poor, poor Bart Jr.!) And THEN…crazy girl marries her impotent (but later not) adoptive father and buys a picnic hamper and puts beds up in the attic? Now, whose fault is that, Cathy? Ugh, I HATE this girl.  Blargh…I just can’t stomach this book at all and now I remember why it took me years to actually read book three in the series, If There Be Thorns…

Hopefully, it won’t take me that long this time, even though it isn’t really looking too promising. I don’t want to read this one and my copy is so raggedy, the cover pages have fallen off (it has one of those cool keyhole covers that I so love about this series, but apparently make them very fragile).  And there is that whole Shatter Me challenge to worry about…

Oh, and I forgot UNBELIEVABLE BIT NUMBER ONE HUNDRED AND THIRTY (and the number one reason these books annoy me) – The author keeps mentioning things in passing that were never part of the book. She refers to these things as if they were actual scenes (often in arguments) but then makes no further reference to them and no explanation as to why they appeared in the first place. Again, lazy writing, inserting things of convenience in your narrative but never going back and including the kernels that would make them plausible…ugh.

Like Loading...
This entry was posted in Creepy/Weird, Fiction and tagged rereads, teen faves, V.C. Andrews. Bookmark the permalink.

7 Responses to Petals on the Wind – Still Dusty, Less a Favorite