Flowers in the Attic – A Dusty but Beloved Re-read

When in need of a calming but engrossing read, I usually return to one of my old standbys. Most recently, I reread Flowers in the Attic by V.C. Andrews, one of the first “adult” books I ever stumbled upon. I probably haven’t returned to in it ten years or so.

It’s still awesome. It’s still a favorite. It’s just not exactly what I remembered it to be. 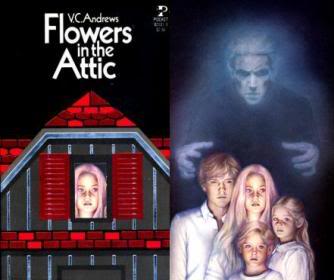 First off, the flaws…it moves far more quickly than I remembered. The events which seem to take so long to occur in my memory (after all, my beloved Dollanganger kids were up in that attic for more than three YEARS) actually breeze by quite quickly and not always with the expected amount of commentary. For example, narrator Cathy dwells on odd moments and their meanings obsessively and seems to skim over other more significant bits with barely a notice. (Hello, that incest thing, the mom disappearing for MONTHS, and the whippings get mere lines of introspection, but the swan bed, the hair tarring, and the dollhouse get pages and pages.)

Iconic and symbolic plot points that are so telling and memorable actually emerge as if afterthoughts…the pearl-twisting, the ballerina music box, Cathy’s talent for dancing and dreams that always seem to come true, the emergence of Mickey the mouse (who totally should have had a ‘C’ name if Cathy’s earlier explanations of their naming conventions are to seem true), the existence of a creepy liveried butler who MIGHT know about them who we’ve never heard of before, even the pivotal poisoned donuts…These elements seem conveniently thrown in without explanation but could have been major clues or bits of foreshadowing if worked in more subtly and thoughtfully throughout the novel.

Is this the problem of being inside the head of a somewhat unreliable teen narrator? Are we to believe these are the normal reactions of a naive young girl to such traumatic events? Or is it just lazy writing? (If the later books — all laughable attempts at a storyline now formulaic and tropish — are to be used as evidence, I’d definitely go with the lazy writing theory. And no deceased author has THAT many notes for future ghostwriters to work from…just saying.)

And now for the strengths. The storyline still keeps me up at night. I still cringe even though I know what is coming. I still ache for big-headed, malnourished Carrie and her doomed twin Cory. I still cheer for Chris and Cathy and find their “sins” understandable. I still compare other fictional villains to Corrine and her creepy mother. I can still vividly see Foxworth Hall, that attic, and their bedroom in my head so many years later. I still want this story to end differently even though I know its outcome and read feverishly through its pages.

Flowers in the Attic even leaves me with the preferred amount of unanswered questions: is Cathy crazy? (And could we blame her if she was?…let’s revisit this idea with the POTW sequel review to come). Is the Grandmother really to blame for these events or is it Momma? Did the grandfather KNOW about the little blond mice in his attic?

Let’s be honest…this is no classic, great American novel. And yet, in spite of its weaknesses, I’m so very attached. I wanted to cry last night when my son’s dog ATE my childhood copy (fortunately, I was done the reread). I’m AGAIN spending my Christmas vacation poring over the series in its entirety. I still recommend this book highly and give it a special place on my bookshelf. I compare all the author’s other books to this one. And really, aren’t those all the hallmarks of a great book?

Like Loading...
This entry was posted in Creepy/Weird, Fiction and tagged old favorites, V.C. Andrews. Bookmark the permalink.