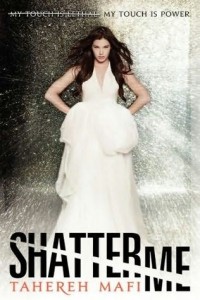 Juliette hasn’t touched anyone in exactly 264 days. The last time she did, it was an accident, but The Reestablishment locked her up for murder. No one knows why Juliette’s touch is fatal. As long as she doesn’t hurt anyone else, no one really cares. The world is too busy crumbling to pieces to pay attention to a 17-year-old-girl. Diseases are destroying the population, food is hard to find, birds don’t fly anymore, and the clouds are the wrong color.

The Reestablishment said their way was the only way to fix things, so they threw Juliette in a cell. Now so many people are dead that the survivors are whispering war- and The Reestablishment has changed its mind. Maybe Juliette is more than a tortured soul stuffed into a poisonous body. Maybe she’s exactly what they need right now.

Juliette has to make a choice: Be a weapon. Or be a warrior.

In this electrifying debut, Tahereh Mafi presents a world as riveting as The Hunger Games and a superhero story as thrilling as The X-Men. Full of pulse-pounding romance, intoxicating villainy, and high-stakes choices, Shatter Me is a fresh and original dystopian novel–with a paranormal twist–that will leave readers anxiously awaiting its sequel.

This book…I just don’t know. I think I liked it a lot. The thing is, I didn’t like the storyline all that much – dystopian stuff doesn’t get me all excited. I liked the characters and the poetic language and the numbers and Juliette and her ability. But I’m also getting a very Hunger Games/Uglies feel from it, which, again, I’m just not that into. I really am looking forward to the sequel because I don’t want the story to end yet, but I’m a little exhausted by YET another story about fighting the evil government. It is interesting to read a book whose POV character is kind of insane, though.

I wrote the above and then decided to let the book simmer in my head for a while before posting it, cause I’m not entirely sure what my feelings are about this book. And the only thing I need to add now is that I keep catching myself going “man, I should get back to finishing Shatter Me, I can’t wait to see what Juliette and Adam do next!” …But I finished the book hours ago. So I’m not sure if that’s good or bad. Good because I apparently got pretty invested in the story, but bad because my brain seems to think it’s an unfinished story, I guess?

Like Loading...
This entry was posted in Fiction, Sci-Fi, Young Adult and tagged dystopian, paranormal, Shatter Me, Tahereh Mafi, YA, young adult. Bookmark the permalink.