So, we have another winner of a book in words and pictures from Brian Selznick! As you probably know, Wonderstruck is the follow-up to Selznick’s The Invention of Hugo Cabret (which is soon to be a Martin Scorcese movie). Like Hugo, it combines real-life places, events, and historical oddities with a tender tale of a lonely orphan boy in tragic circumstances. A quick read, Wonderstruck stands well on its own and is no way a sequel to Hugo Cabret.

This story seemed both more and less predictable to me than Selznick’s last project; as a reader, there were moments I could totally see coming as well as several delightful sections I stopped to reread because they caught me excitingly off-guard. I hesitate to give away too 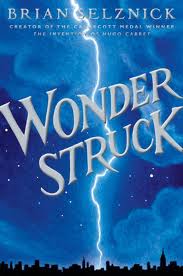 much here, as some of my favorite moments, and the most interesting ones to discuss, were those surprises.

My only complaints…this story, which combined two protagonists (one whose story developed mostly in the past through pictures and one, presumably current — or at least significantly later timewise — through words), is not as seamless as Hugo. I think this is because the plot arcs in the intertwined, but clearly separate, narratives of Rose and Ben, overlap significantly. Until I figured that out, I struggled a bit.

I also found that Ben’s injury, his dancing cousin, the seashell turtle, Daniel’s trip to Minnesota, the arrival of Rose’s mother and brother, and Jamie’s abrupt entrance were merely convenient loose ends that were not explored fully. (In particular, I still don’t really understand Jamie — there is clearly a mystery going on with this child and his absent father that I don’t get at all.)

Overall, though, I will take unexplained mysteries, sections which I need to reread to make the necessary connections, and slightly hokey “twists” in exchange for the strengths of the story: its surprises, its revelatory dip into World’s Fair and museum history, and pictures too beautiful to ignore.

Haven’t tried either of these books by Brian Selznick yet? Pick them up and give them an hour or two of your time. You won’t be disappointed.

Like Loading...
This entry was posted in Fiction, Pictures, Young Adult and tagged Brian Selznick, The Invention of Hugo Cabret. Bookmark the permalink.