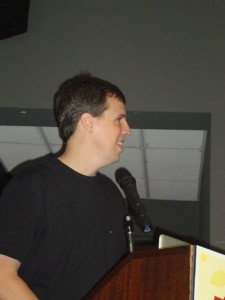 I felt excited to meet my second favorite author this week. My mom and my brother and me stood in the cold rain and waited to go in. I wore my blue wimpy kid pants and my Zoo-wee Mama shirt. We had to sit down on the floor of the library. Jeff Kinney came out and talked about his first cartoon Igdoof and how he got to be a author.

He showed us foreign covers for Diary of a Wimpy Kid. The Hebrew one was backwards, the Japanese one had all the fingers (which was weird but I forget why), and the one called Diary of a Banana. The funniest one was the German one called I’m Surrounded by Idiots because they have no word for wimp.

Then he had two surprises for the audience. The actors from his movies came out. Zach Gordon who is Greg Heffley the wimpy kid and Robert Capron who was Rowley in the movie talked to us about how they became movie stars. 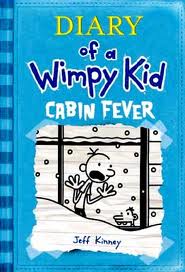 Cabin Fever – the book was good. I read it in one whole day. My mom let me stay home from school to do that. My book was signed by the author. It is better than the other wimpy kids books because it has a better story. It is more descriptive and he told us there will be a seventh book. But the problem is he needs 350 ideas and he only has 2. It might be a long time, but I’ll read it anyw

(My favorite author is Jeff Smith who made Bone. My third favorite is Tom Angleberger who wrote Origami Yoda and Darth Paper. He came to my school this week, too. I am supposed to get signed copies of his books too even though I already have them, but I didn’t get them yet.)