The Unimaginable by Dina Silver

This was another Christmas present book like Still Alice. And the premise sounded great…small town girl seeking adventure goes to Thailand to teach underprivileged children, but while sailing with friends, an “unimaginable” disaster strikes.

Except…except…it’s the most predictable and imaginable disaster ever, especially since they alluded to it no fewer than five times before it happened! Just a hint: it’s only considered unimaginable IF you weren’t warned by your boyfriend, neighbors, sister, and various boating safety authorities about how dangerous the trip might be. And yes, I suppose the “Unimaginable” of the title is a bit of a play on the title of the sailboat they’re on called Imagine, but it simply doesn’t work. It also gets taken to the hokey level when  the love interest’s ex-wife pens a letter about what can be imagined and then in a terribly unnecessary full-circle wrap up, Grant and Jessica have a daughter and use the same damn “I can only imagine” line to inspire her. Ick! 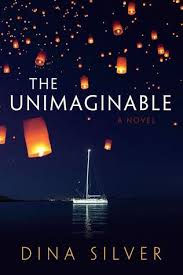 The writing is predictable and uninspired, mostly because Silver displays interactions between the main character and love interest in a trite, underdeveloped manner. In fact, neither of them get the nuanced character development necessary for such a story. Grant is handsome, troubled, rich, unapproachable, and mourning his dead wife. Jessica is a naive, young, and eager small town girl. No character growth ever. Blah.

The story is also terribly slow moving. It takes 150 pages to get to the actual unimaginable “boarded by pirates” event, and then it gets only 25 pages of the story. The damn RESCUE takes longer and the uber-unnecessary “happy ever after” ending both get more page-time than the unimagined thing itself! The pacing on this is just terrible, the editing could use some work (typos and tense shifts abound!), and the writing is amateurish at best. For example:

I wanted so badly to wrap my arms around him, squeeze away the pain, and never let go. The words he used to described Jane were exactly the words I would’ve used to describe him. I lowered my eyes, thinking of the lettter and her beautiful words. I owed it to him to tell him, and just as I was about to lift my head and confess, my eyes welled with tears…

I squared my jaw and gazed into his eyes–dark blue, like the water that carried us — so that he might sense a shred of the shame that was festering inside of me.

Hurk. Sounds like every middle school love story ever penned, and yep, that is an extraneous “d” at the end of “described.” Yuck.

Throughout all of it, I had to keep asking myself: is this self-published? It’s got such terrible writing, terrible pacing, and it can’t decide if it is an adventure story, a romance, or someone’s crappy vacation memoir. Essentially, it’s by a subsidiary small publishing unit of Amazon…and ew. Shame on you, Amazon. Anyway, this was almost a DNF for me, and I think perhaps it should have been. Skip it and imagine your own story instead.

Like Loading...
This entry was posted in Contemporary, I Want My Money Back!, Romance and tagged Amazon, Dina Silver, Lake Union Publishing, The Unimaginable. Bookmark the permalink.