I’ve been reading Jenny Lawson’s hilariously funny posts over at thebloggess.com for a while now. She always cracks me up, but I hadn’t gotten around to reading her first published book Let’s Pretend This Never Happened until this week (and yes, I’m looking at you, again, Outlander). She’s down-to-earth, she writes in long convoluted sentences with lots of parentheses, she’s supremely socially awkward, and she has a thing for taxidermied animals dressed in cute clothes. In fact, she reminds me a bit of me, just with the addition of stuffed critters and giant chicken sculptures. 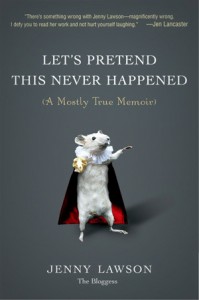 My favorite parts are always Lawson’s interactions with her long-suffering husband, Victor. I laugh out loud at these because she always manages to say things in such a unique way. For example, after Victor leaves the only remaining wet towel in the house on the floor, she leaves him a series of passive-aggressive Post-It notes so he can correct his behavior and, I suppose, so she can avoid confrontation, a skill at which she is notoriously bad. It devolves into a tirade about tuberculosis, who should throw away the empty pizza box or clean cat vomit, why there are so many business suits awaiting the dry cleaner if they both work at home, the proper technique for drying clothes, and why she has secretly poisoned one (or more) items in their refrigerator. She also may or may not have stapled their wedding photo to the cat’s leg as an apology which will later require amputation.

Other standout chapters include “I Was a Three-Year-Old Arsonist,” “If You Need an Arm Condom, It Might Be Time to Reevaluate Some of Your Life Choices,” “No One Ever Taught Me Couch Etiquette,” “Thanks for the Zombies, Jesus,” and “A Phone Conversation I Had with my Husband After I Got Lost for the Eighty Thousandth Time.”

The accompanying photographs with captions and little notes from her editor inserted into the prose crack me up as well. It seems that the only thing that can reign Jenny in isn’t Victor, it isn’t the folks over at Penguin Books, it’s isn’t even necessarily sticking to the truth: it’s anxiety. She gets mouth diarrhea whenever she is forced into a social situation and ends up at various times telling people how she gets stabbed by a chicken cutlet, how she was sort-of stabbed in the face by a serial killer, and that her vagina is fine. She tells us in the first lines of the book that she is also an exaggerator who doesn’t know when to quit talking and insists she should only talk to people over email, and that my friend, is something I can definitely relate to. Anxious minds think alike, I suppose, and I think Jenny Lawson is my new hero.

Basically, I just want to live in Jenny’s house because it sounds like the best kind of fun. (Of course, I can only come once they find the dead bodies and call the exterminator again.) Barring that, I’ll just be her best friend, even though she doesn’t really make friends with females. Damn. I guess I’ll just wait for book two.