Two Dorks, One Book: Written in My Own Heart’s Blood by Diana Gabaldon

So, this is the series that wrecked my Goodreads goal for the year (by like 20 books, but whatever). AND, it was so not worth it. I mean, don’t get me wrong, overall, I think I liked the series as a whole, but I just spent 8 months of my life on these 8 books, and they’re only…sort of…good. So please forgive my ranty, uberlong, jump-all-over-the-place post, but I’m feeling SCREAMY. 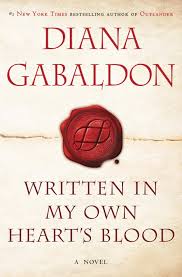 I gave lazy comments to Kelley’s reviews on the first seven because, meh. And also because, I couldn’t remember what the damn things were about by the time I was done reading each one. They’re that long and convoluted. So, since I’m finally finishing the last one (Cue “Celebration” by Kool and the Gang), I’m doing a longer review while I read so I can put this thing to bed.

First off…I do not care that John Grey (who I’m pretty sure was named William in the first book, but again, whatever, because that seems to be a thing this author does here) is captured or has a broken eyeball or that his son, actual William, or Lord Ellesmere or Lord Ransom (or why-the-hell do English folks have so many damn titles?) is whining that he’s not technically an earl any more or that Ian and Dottie are each marrying a Quaker.

Why are there even Quakers IN this book? And why is there a Dottie? Or a Hal or a Ben or an Adam? And why the hell are all these f-ing people all related? Because every time there is a new character… Bam, backstory and family tree of someone we already know! I am just so tired of meeting people (a la Simon Fraser and Charles Grey and Denny Hunter and Denys Randall-Isaacs — whose name is too close to Denzell Hunter and who ALSO drops a name halfway– and Perseverance/Percival-whose-damn-name-changes-halfway-through-the-book Beauchamp or Wainwright or whatever) who I am supposed to already know. To me, that’s just lazy writing of an author to sick of her own book to develop a new and interesting character.

To top it off, there are now also Rendills and other similar named folks who aren’t actually even related, and I don’t even know what all. So someone buy Diana Gabaldon a baby-name book next time she writes a novel, k? Because even if all of this was still happening in Scotland where everyone is Mac-something (and I’m still quite miffed that it’s not, since THAT is the series I signed on to read!), THERE ARE MORE THAN FIVE FAMILIES IN THE WORLD. BRANCH OUT A DAMN BIT, Gabbs. I don’t care if the names are similar because he/she is some great-grand-whatever of the current characters because apparently everyone is a time traveler AND this is ridiculous!!!

And of course Henry, another random relative, is in love with the (black, gasp!) wife of a man/wounded husband Claire treated who likely died. But since Claire both moves throughout time and space AND travels with men to war (how weird is that?), and also because she can’t logically know everyone and everything, she never tells the widow because, you know, how would she explain that? And of course old Ian (NOT new, nephew Ian who we sort-of care about because he’s been on the perimeter for the last six books) got sick with TB as a result of something John Grey’s brother did as Lord Melton, Duke of Pardloe which ticks off his widow who is apparently holding him hostage by proxy. Because that’s a reasonable way to get consumption and then that plot twist gets dropped five minutes later so it wasn’t important after all, but is a thing we do in this series. And also, again, BECAUSE THERE ARE ONLY FIVE FAMILIES IN SCOTLAND, ENGLAND, or AMERICA and apparently, we’re reading about them all! And we’ll add in random famous folks to stir things up a bit. Don’t forget: Benedict Arnold is nice but George Washington is …decidedly less so. And, GRRR.

And then they FINALLY get to the damn war stuff they’ve been worried about coming on for like four books, and Claire gets shot (and let’s throw in a whole ‘nother predictable as hell plot twist) so Jamie resigns his commission DURING AN ACTUAL BATTLE because, sure, that’s not treason and is an acceptable reason to abandon your men. And this is why family members shouldn’t be allowed to tag along during war. But okay, so let’s let Claire be unwell enough while recovering that they are signing on for yet another sea voyage even though there is a whole blockade thing going down during this war, and she just thought her husband was dead at sea, and she herself ended up captured and on HOW MANY DIFFERENT SHIPS in the last books??? Oh, and then let’s not even mention the voyage at all before uprooting 11 people to the south again, also during war time. Sure. Because it isn’t even important. Sure.

And of course, we must kill off our dwarf character because he’s not important either, and has outlasted his usefulness as cute grandson/plot complication for leaving Fraser’s Ridge/comic relief. But, since people, especially children, die all the time even though Claire is some miracle doctor, no one is upset about this for longer than three pages. And whatever, I’m done with this book, because that’s all the nonsense that happens in the timeline I actually ENJOY.

Because we also get THIS in the other timeline I’m NOT a fan of:

Jem gets kidnapped and sent through the stones, only not, because he’s found five minutes after being abducted NOT through the stones because he and his sister have some psychic ties or some shit. Which, of course, leaves his Dad Roger stuck in the past trying to save him because he didn’t realize it was just a ploy to…get gold. Oops, no. Get revenge on a ridiculously unqualified female boss. Uh, no again, not that either. Rape Brianna? Sure, because THAT seems more plausible. And oh, yeah, (apropos of EVERYTHING), Roger’s stuck in the wrong timeline with the wrong Jem because his great-grandfather-umpteen-times-removed (who also tried to kill him, but is now forgiven, and ALSO has a son named Jem) was thinking about his own son (who they conveniently also DIDN’T end up with), and Roger was thinking instead of his actual kid, just the name Jeremiah, which he’s never actually CALLED his son, but is (you guessed it!), also his missing dad’s name. And I mean, sure, since he’s going back to save his missing son, of course, he’d think of him by a different, random/formal name! Of course!

Except that when Roger goes back and wanders god-awful too long and finds the dog tags of his dead father in a place he had no business being, he’s not only out of the timeline he went to find Jem in, he’s also in his dad’s anachronistic timeline because, sure, he was a time traveler too (which again, we knew, but didn’t care about). And maybe that should be important, and maybe I should care that Frank Randall knew all this and sent Bree a letter, but see, I don’t. I just don’t care about this damn book anymore. Because all of this should-be-important stuff takes maybe 15 pages of this gargantuan, thousand page book, AND, by the time it happens at all, we already know Jem is safe with Bree and Mandy during the present (because of the psychic link, remember?).

And, since I don’t like Roger enough to care that he is stranded in the past and won’t know to come back now that Jem has been found, or gasp! might meet his father, or sure, Jamie’s father, or Buck (which is a DOG NAME)’s father, or Black Jack Randall (who is the evil grandfather of his wife only he’s kinda niceish), and sure. Just sure. I should have quit three books ago.

Anyway, this whole subplot seems contrived to make me care about the Bree/Roger timeline and create tension that isn’t needed and IS ALSO NOT WHAT I SIGNED ON TO READ. I say leave Roger there in the (wrong) past and move back to Jamie and Claire already.

Except when we ARE back in the Jamie/Claire story, then there is all the Revolutionary War fighting crap, and William finds out Jamie is his father and is super pissed, and then hooks up with child-whores he doesn’t actually sleep with, and everyone is a spy on the wrong side and who cares???

And, I guess that’s my review. Because I know I should go shorten and tighten this review and make it make actual sense, but hey, Diana Gabaldon makes millions and apparently, she doesn’t have to so…NO. I’m done.

Like Loading...
This entry was posted in 2 Dorks 1 Book, book club reads, Excuse me, Fiction, Film Based on Books, I Want My Money Back!, Random Rants, Romance, WTF? and tagged Diana Gabaldon, Jamie and Claire, Outlander, series, Two Dorks One Book. Bookmark the permalink.

2 Responses to Two Dorks, One Book: Written in My Own Heart’s Blood by Diana Gabaldon