Written in my Own Heart’s Blood (Outlander #8) – Diana Gabaldon 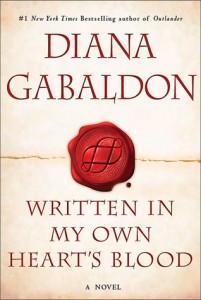 There’s so much here that I COULD complain about.

I could complain that this book didn’t really advance any storylines at all. Nothing life-altering happens, no big mysteries are solved, they basically spent the whole book thinking that maybe they’ll go live at the ridge someday soon, and then at the end they travel to the ridge, and then it ends.

Or that I really really didn’t need to hear so much detail about the fistula. Oh god, the fistula. Also the tar and feather amputation victim was kind of gross as well, and neither of these people had anything to do with anything or will probably ever be seen again.

That William and Henry and Hal continue to be boring as hell and just run around getting captured and released throughout the whole book like bumbling idiots.

That Clare and Jamie had nothing interesting to do, at all. Battles, fistulas, and love-proclaiming, that’s about it.

That the Bree/Roger storyline could’ve actually been interesting but there were like, quarter-of-the-book long sections where they weren’t even mentioned. It’s REALLY SAD when Bree and Roger are what I want to get back to, because I kind of hate them.

That I’ve decided that while Gabaldon is really good at writing love stories, her battle scenes immediately put me to sleep. Maybe this was just a super boring war.

I won’t complain about any of those things though, I will take the high road. But…seriously, this book was kind of bad.

However…I still can’t wait till the next one is released. I am a glutton for punishment.