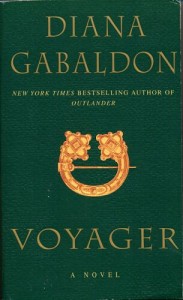 So at the end of the last book, Dragonfly in Amber, Claire realizes that Jamie didn’t die after Colloden and so he could still be alive in the past, 20 years later. Well, I don’t really think I’m giving too much away when I say that of COURSE he’s alive or there wouldn’t be 8 books in this series!

So. It’s kind of cool that in the beginning, the story is told in alternating POVs – you get Jamie describing what happened to him after Colloden, then Claire showing what happened to her at the same time, interspersed with Roger and Claire and Brianna in the present trying to find the next clue to what Jaime’s up to. And I’m super happy to see their reunion and all, but Jamie’s kind of a jerk when they meet up again. He’s doing some boring things and then the two of them embark on a Thrilling Mystery. Except not really.

Voyager was OK. I really love C&J together, but that’s kind of the best thing about the book. The rest of it…well, it sort of falls into generic mystery territory. Not “awesome story of love and historical fiction.” It’s not bad, but it’s the weakest so far, for me. There’s a part where Jamie is tricked into deflowering a virgin in order to further the plot, and you’re just left thinking about how contrived the whole thing was. Also the Geillis Duncan and Mr. Willoughby parts were just…no.