So this is an enormous book in a ginormous series and I really wasn’t sure I was going to like it. Unfortunately, I was also afraid it would take me a long time to get through, so I started WAY early for book club and now, two months later, I can barely remember enough interesting things to say about it in this review. (I’ve GOT to start doing my reviews right away because I always think I’ll remember and I don’t and I suck.) So, apologies and all of that.

I’d heard SO much about this series and was sort of afraid to believe the hype. Also, it seemed too romancy and period-piecey and dammit, it has to be said, overlong. However, once I got into Outlander just a bit, I found I liked Claire…she’s a flawed heroine for sure, and I enjoy that. I don’t want to lose myself in a story about a perfect person or I’ll get bored. That’s why I like Claire; she’s not completely in love with her husband, not completely saintly in her rather altruistic job as a nurse, and not completely naive in that she traipses into her time travel by accident or anything. She is curious and adventurous and stubborn and it’s wartime, so I buy that.

I also like when necessary magic is interwoven into a book without distracting me. I mean, when I’m reading, I don’t want to be hit over the head with time vortexes and space anomalies because that will pull me out of the story. And when I’m reading, the story has to become REAL…so I don’t want the magic to intrude, you know? So, other than the initial vibrating Stonehengey rocks that pull Claire into the past, there is no magical nonsense to pull me away from the narrative. That’s a win.

At first, I was also unconvinced about Jaime as a love interest. He seemed too young and dunderheaded (You just don’t go throwing yourself into battles when already wounded, you idiot!) to be an acceptable lover for a modernish woman like Claire. He unabashedly wears a kilt, which is kinda quirky and appropriate given his background, but still! And then, I guess I begin liking him against my will (maybe it was the sex scenes that suited my own personal quirks perfectly…ahem) and then all is well and I am suddenly okay with him.

My only complaint is that the whole outlaw laird thing seems a bit convenient. OF COURSE he’s a landed gentleman who is disgraced because Claire would surely not stay in the past without hot showers or cold drinks for some nobody. And of course, even though he’s wanted, he has to go back to visit/save his land right in the middle of the Jacobite rebellions (which I really liked reading about in Susanna Kearsley, 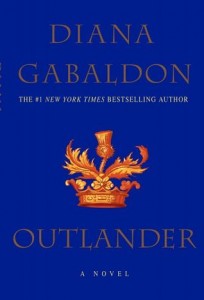 btw). But then, once there, he is teased by his sister (which I adore) and he goes out to fix waterwheels for his people in his undies, so bravo. And when he has to hold his breath and hide under the river and then takes in a little abused boy as an apprentice, he seems like such a decent lord to his folks and a good brother and all, so I forgive him and completely start to like him after all. Darn. And I tried so hard not to because he’s just so NOT my typical leading man material.

(I would recommend this since I enjoyed it so much, although I tried immediately to read the sequel and there was no Jaime or Claire and the storyline seemed off, so I gave up.)

This book is SO DAMN HUGE that I don’t even know what to say about it except that I loved it. Historical fiction with a smattering of English monarchy history…um, yeah, this is my kind of book. I could do without the sex scenes, which always prejudice me against a book and make me think of it as pure trash. That has a place, but not in my favorite literature.

Somehow, somewhere, before starting Outlander, I’d heard that Claire hooks up with her husband’s ancestor in the past. It took me about half the book to realize that Randall was NOT the hero and that I was in no danger of having to throw the damn book (my kindle) across the room when she left Jamie for him. Sometimes I am not smart.

I do want to talk about Claire’s second marriage. Claire doesn’t seem to like her husband all that much, and when she steps back in time she immediately (and inexplicably) starts insisting that her husband is dead. After only a half-hearted token protest, she marries Jaime. And wears both wedding rings. And it seems like Gabaldon knows that it’s complete bullshit, since after not really mentioning it again for the entire book, she brings in a priest at the end to absolve Claire of any wrongdoing in marrying someone else when SHE IS ALREADY MARRIED.

And now, on to the next insanely long Outlander book, Dragonfly in Amber.