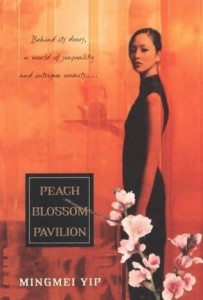 Oh boy! Look at that pretty cover! This is going to be an awesome historical fiction book and I’m going to learn all kinds of things about Chinese culture. This is the story of Xiang Xiang, a young Chinese girl who ends up at a house of prostitution, and it’s going to be just like Memoirs of a Geisha and I’m so excited!

…Uh, no. This book is trashy. I didn’t exactly hate it, but I feel so misled that I’m removing Mingmei Yip’s other books from my TBR.

You might be thinking, “Hey Kelley, it’s not fair to expect this book to be Memoirs of a Geisha part 2, it’s not even Japanese!” But I don’t think it’s unfair at all. Memoirs of a Geisha shows that THIS EXACT STORY can be beautiful, possessing class and taste…but Peach Blossom Pavilion completely missed that mark. It’s a Chinese romance novel with a bunch of bad language thrown in.

And the writing is…not good. It’s a weirdly stilted mix of formal and casual language. I keep wondering if maybe it was written in Chinese and then translated into English, but the author seems to be an English speaker, as far as I can tell. And I’m not shocked at all by bad language but it seemed very out of place in this book. Just…it’s trash disguised as legitimate historical fiction. I also really hated the constant euphemisms as if this is a kid’s book. Not just the sexual ones either…even hair is “three-thousand-threads-of-trouble. Penis is “jade stalk.”

And as if all that’s not enough, right around the halfway mark it just gets weird. Xiang Xiang runs away to join the Chinese circus with her lesbian lover who is disguised as a man and is married to Xiang Xiang’s most powerful customer. I just…what? The first half of the book seems to be attempting historical fiction, but then it turns into a damn soap opera.

Peach Blossom Pavilion will be released on March 27th 2014 by AVON, HarperCollins Publishers. This book was received from the publisher in exchange for an honest review.