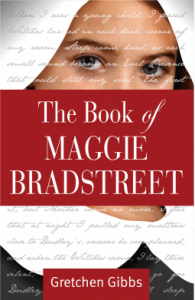 Maggie Bradstreet is a curious girl of thirteen with a mind of her own, which can get her into trouble in Puritan New England. She wants nothing more than to prove to her brother’s friend Job that she is no longer a child, but when witches are discovered in their community of Andover, Massachusetts, her world turns upside down. Maggie’s diary tells of excitement turned to horror as more and more people are accused of witchcraft, and her best friend’s mother is taken off to jail. She tries to save her friends and in the end must save herself.

Can we talk for a minute about how freaking glad I am that I wasn’t born a Puritan? That time was 1) scary, 2) horrible and depressing. I mean, they didn’t even get to wear pretty clothes! Which I know is one of the points of Puritanism, but whatever. If I’m gonna live in another time period, I’m gonna wear a big fluffy dress. Anyway, the Salem Witch Trials are completely terrifying to me. To see the vindictiveness that can lead to someone being declared a witch…horrible. Look at someone funny, and you could be thrown in a dirty prison for months and then hung. Geez.

Now, about Maggie Bradstreet. First of all, the book is written in the form of a thirteen-year-old’s diary. And in that respect it’s pretty well done, I could see a girl of that age writing/thinking these things. But on the other hand, it’s…written by a thirteen-year-old girl. The wording is very straight forward, not poetic, not flowery, not particularly pretty. So…I can’t decide whether that bugs me or not.

Maggie’s just a normal colonial girl, blah blah cooking and cleaning and playing with her friends (and I absolutely love reading about daily life in other eras, so yay!), until people start being arrested as witches. It’s scary to see things in the town get worse and worse, and to see Maggie get more and more scared. People close to her are being arrested left and right, for ridiculous reasons, and it just escalates from there. You know what, everyone should just read this book, it’s worth it.

Some quotes from Maggie:

“I wish Annie had lived, so that she could be the youngest child and have to pound the corn [instead of me].”

“I have never seen a man weep before, except Dudley, when he was twelve and I broke his finger with a mallet, after he tormented me wickedly.”

Unless I wasn’t clear, I really, really liked this book. A lot. And then as an added bonus, all the historical references that I had to look up threw me into a Wikipedia loop again, so I feel like I’m learning things too! Did you know that Cotton Mather (the rotten witch hunter guy who actually does show up in the book) was the person to insist on inoculation against smallpox, effectively stopping the Boston smallpox epidemic of 1721?

So apparently I do like books about witchhunts after all. What else should I read?

The Book of Maggie Bradstreet was released on Mar 29 2012 by Glenmere Press. This book was received from the publisher in exchange for an honest review.

2 Responses to The Book of Maggie Bradstreet – Gretchen Gibbs