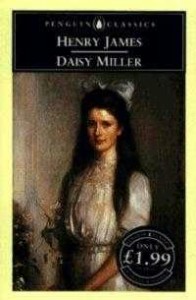 I always feel weird when I try to review a classic, especially if I didn’t like it, because A) everything that can be said has already been said, and B) I’m afraid that I will have missed some great metaphor or theme or something and that I will look dumb. But in the case of Daisy Miller, I DO NOT CARE, because this book sucked. SUCKED!

So, this american guy named Winterbourne is bumming around Europe and meets another american, Daisy Miller. She is beautiful, but doesn’t conform to society’s standard of behavior for a young lady: she goes out with men alone for walks at night – GASP!! Winterbourne spends the entire book trying to figure out if she’s just innocent and dumb and doesn’t understand why what she’s doing is “wrong,” or if she’s trashy and calculating and whorish. Near the end of the book, Winterbourne sees her in the coliseum at night with Giovanelli, this guy she hangs around with the most, and decides that she’s just a big fat slut after all. Then Daisy gets Roman Fever (malaria) and dies. And then the book ends. I MUST be missing something.

Another thing that disappointed me is, the whole reason I read this book is because Rory Gilmore mentioned it once. She said, “So what is this, a Henry James novel? The young lady acts up and her family ships her off to Europe? Say goodbye to Daisy Miller!” But ummmmm…that’s not at all what happened in this story, so I dunno wtf.

Daisy Miller is super short, like 2.5 hours in audiobook form, so it’s worth giving it a try if you want to read a really terrible short story, I guess.

Audiobook notes:
Narrator: Bobbie Frohman. She did a very…american accent for this book, in a weird way. It was very…Peggy Hill-ish. Kind of annoying.