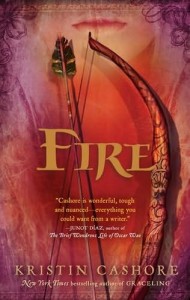 Fire is about a girl with magic hair, and – yeah that’s right, I said magic hair –  and magic beauty that can make people overcome with desire. There’s also some nonsense about her being able to control people’s minds, except…she can’t, really. We’re told over and over how dangerous she is…and then we’re told over and over how how helpless she is. It makes for a confusing story.

So this is a companion book to Graceling, not a sequel. It takes place maybe…30 years before Graceling? It’s technically set in the same world, but the two areas are separated by mountains and don’t really know about each other. The Graceling half of the world already has something to make it special – why is it that when you cross the mountains there are suddenly no more gracelings, but there are brightly colored mind-controlling animals?

Ridiculous magic people aside, I feel like the part of the world that this story took place in was just too different from the world of Graceling. There is an important overlapping character, and I liked hearing about his younger years, but I feel like the setting of Fire’s world would have made for a better standalone series. One that I wouldn’t have read if it had nothing to do with Graceling. Also, I did NOT like that the important overlapping character I mentioned didn’t really get an ending in the story.

I feel about the same about this book as I did about Graceling – I enjoyed reading it, I look forward to the next in the series, I might even read the series again someday – but I don’t really have much to say about it.