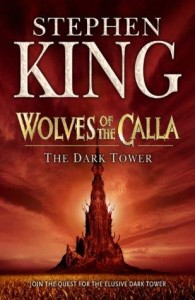 Seriously.  SERIOUSLY. This is why I have a book blog, so when I read something that makes me this crazy I can rant about it here.  This is the strangest book series I’ve ever read, and I’m not sure it’s a good thing. First though, let it be known that I will be talking spoilers here, so do not read on if you ever want to read this series.

Ok, so…Wolves of the Calla is so fucking weird. I don’t even know where to begin. The main story is about a small town where every kid born is actually twins, and the town is visited every 20ish years by a group called “wolves,” who steal one half of each set of young twins and send them back later as empty, drooling husks. So Roland and the gang are, of course, called upon to help the town. This is a super cool concept, right? I loved this part of the story. There is a big mystery about who the wolves actually are, and some of the townspeople might be in league with them, and there’s a big robot who runs around town babysitting the children and telling horoscopes and being mysterious and kind of jerky. It’s really cool.

Near the end of the book, the secret of the wolves is revealed. And since King darted around this mystery for the entire book (actually using gems like ”He leaned in close to whisper the secret into Eddie’s ear and Eddie was stunned! It all made sense! End chapter.), I assumed it would be something super cool and shocking, but… Robots. Just more stupid lame robots. But wait! There’s more! These aren’t just any robots. They’re a gang of robots that were built to look like Dr. Doom. And for weapons they use A) lightsabers, and B) Harry Potter’s snitches that fly through the air and cut off limbs. LIGHTSABERS AND SNITCHES. I’m not even exaggerating about any of this, these are the actual words that were used. Lightsabers. Dr. Doom. Harry Potter.

And its not like I can quit the series now, either. In the next (6th) book, the legless gunslinger lady with multiple personalities who traveled from the 1960’s to join Roland’s gang is going to give birth her demon-baby… and the gang has to stop the demon baby from eating her first. This shit is STRANGE.

Like Loading...
This entry was posted in Fantasy, Sci-Fi, Uncategorized and tagged Dark Tower, fantasy, Sci-Fi, Stephen King, Wolves of the Calla. Bookmark the permalink.