Sorta liked it: Seraphina is an original, clever, political novel about a medieval society in which dragons take human form and interact fairly freely with the rest of the population. I found the world of Goredd fascinatingly real and well developed in some parts (I can visualize the Quig streets, underground passageways, and even parts of the castle), yet I can’t always get an idea of how the plot works in others (For instance, how does Seraphina’s mother get away with her secret? Where do her parents even meet? Why isn’t it a bigger deal that someone ATE the prince’s head???) 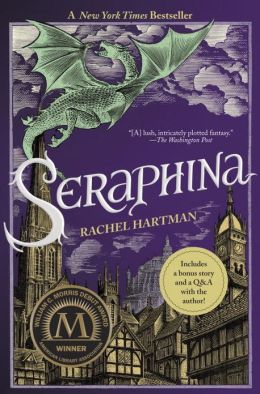 I really enjoyed the banter and true caring that was evident between Glisselda and Lucian as well as Viridius and Phina. Also, Seraphina’s all-too-real fears about the discrimination she’ll likely face and her bond with Orma seem plausible and relatable. The dragons are also a strength in the writing here because they seem like real living, creatures, not just fire-breathing monsters.

But I guess my biggest problem with Seraphina is simply: who is it written for? Tweens? Teens? Grownups? Frankly, Seraphina seems too pedantic and pompously worded for YA and a few of the sexual references were a little too bawdy or graphic to seem appropriate for teens. Also, in my opinion, no kid is going to understand what is going on here or look up all the medieval terms or understand the somewhat dense jargon even though a glossary is provided. I feel that the subject matter and the main character’s age, though, make it unlikely to be mainstream adult fiction, even for fantasy…Ah well, still worth the read. Not sure if I’d pursue a sequel, although there will surely be one.

Like Loading...
This entry was posted in Fantasy, Fiction, Young Adult and tagged dragons, fantasy, Rachel Hartman, Seraphina, YA. Bookmark the permalink.