Al Capone Does My Shirts by Gennifer Choldenko

I was surprised how much I liked this story about Moose, his autistic older sister Natalie, and their friends who live on the island of Alcatraz. This is a clearly unique and well-researched historical novel for kids and that is awesome. 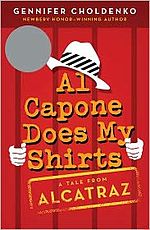 Basically, Moose is upset because he has to move to the prison island and be isolated from his friends, but he must do it so his sister can go to a special school in San Francisco. His dad just got a job as a guard and electrician on The Rock. Moose befriends a number of kids on the island (where no one except inmates plays his favorite game of baseball), but can’t seem to get people to understand his sister, particularly the warden’s mean daughter Piper. Of course, he sort of likes Piper, too, since she’s beautiful.

Natalie’s troubled time on the island intensifies when she is removed from her school because she is not ready. Since both of his parents are working, this means Moose must look after his sister and keep her from breaking any of the very strict rules on the island so their dad won’t lose his job. Moose decides to call in a favor from the famous gangster on the inside, Al Capone. I love the drama of this; Moose is a great brother, but clearly still a naive kid. I’d definitely recommend this one.