First off, let me just say that it is still rare that I put a book down unfinished. I’ve tried over the last year or so to walk away from books that are just not good, so that I can spend more time enjoying the truly great ones. Unfortunately, though, I still always feel like a book is going to get great on the VERY next page, so I keep on. When I don’t finish, there is usually something truly hanging me up about what I’m reading. That said, MOST of these were probably very good books in their own right and the problem was likely me…and my reading rut of late. Anyway, here are my 2013 DNFs. 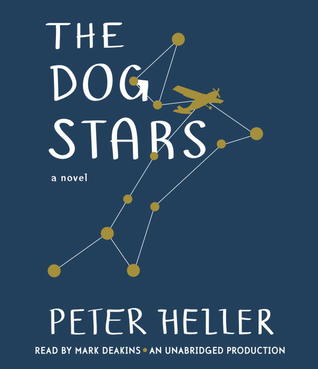 The Dog Stars by Peter Heller: I read the first third of this post-apocalyptic thriller expecting it to be good (the reviews were highly positive). However, when I was 33% done and the event mentioned in the blurbs still hadn’t happened, I was bored and quit. Apparently, Hig, a pilot, hears a radio transmission while on a flight in his private plane around his destroyed hometown and then decides to take off to see what else is out there. Neat, right? Well, maybe that WOULD have happened if he ever got around to it…but mostly he just flew around ignoring the transmission (from YEARS before???), stealing Cokes from abandoned trucks, feeding human meat to his dog (WTH?!?!), and fishing/missing his wife. He also is secretly taking some supplies to some Amish-acting folks (yeah, I know this is the apocalypse and all, but I think these folks were like this BEFORE), and getting irritated at his one remaining neighbor. The apocalypse in this case is pandemic flu and then some blood-borne disease which followed and killed most of the survivors. Hig’s vernacular is also awkward and weirdly punctuated and I couldn’t get used to it. Bleh.

Cloud Atlas by David Mitchell – I got this from the library and didn’t get to read it before it expired. I did read the first

chapters but it didn’t grab me. I had heard about the fascinating premise of this (multiple narrators, multiple timelines, etc.), and I’d like to think I’ll be getting it again from the library to try again when I’m looking for something complex and not escapist. I hear the movie is awesome, and if I just give it a little more time and a few more pages, it will be wonderful… but, it didn’t work for me this time. Maybe when I’m in a different mood.

The Casual Vacancy by JK Rowling – I can’t even…just NO. And I want none of that Robert Galbraith shit either. I can’t believe I paid money for this.

Moby Duck: The True Story of 28,800 Bath Toys Lost at Sea and of the Beachcombers, Oceanographers, Environmentalists, and Fools, Including the Author, Who Went in Search of Them by Donovan Hohn – Seriously, the obnoxiously bombastic title should have tipped me off. This should have been an interesting read and yet, it just wasn’t. The narrative was self-involved, pedantic, and kept veering off course. I think the biggest problem is that not enough rubber ducks were featured in the story and there was FAR too much of Hohn’s self-absorbed backstory. (I seriously felt like I was going to track the man down and smack him if he told me ONE MORE TIME how he was abandoning his pregnant wife at home for this nonsense journey that he truly isn’t qualified to take and THAT COULD HAVE WAITED). It’s almost like he kept saying these things that were intentionally selfish and annoying and waiting for us as readers to tell him “no, no, it’s okay, you’re not a miserable lout of a human being.” Yeah, NO. I guess the main problem is that I didn’t like the guy telling the story enough to like his story, you know? Ick. And I really want to read about the lost squeaky toys that this book SHOULD have been about, dammit. I feel robbed.

Fried Green Tomatoes at the Whistle Stop Cafe by Fannie Flagg – This was a book I really wanted to love. I’d seen the movie, and I generally love every eclectic or random thing my book club selects. I also tend to really like Southern literature. But, alas, the craziness of NaNoWriMo ate all my reading time and I didn’t get to finish this one. I’m such a slacker! Since I really liked the conversational narrative style and did find it to be a fairly fast read, I’ll probably finish this up over our holiday break from school.

The Chronicles of Vladimir Tod 2: Ninth Grade Slays by Heather Brewer. – I did finish

the first one in this series recently and have planned a separate post about that soon. While it was not groundbreaking or even unique, it seemed to be standard and acceptable teen vampire fare. I liked the added twist of the MC being a teenaged boy; so often these paranormal books have young and fairly weak female heroines that I cannot get behind. Anyway, the first was a decent read, but I wasn’t compelled enough to continue the series.

Have you left any readings unfinished lately?

Like Loading...
This entry was posted in book club reads, Contemporary, Fantasy, Fiction, Film Based on Books, I Want My Money Back!, Random Rants and tagged DNF. Bookmark the permalink.