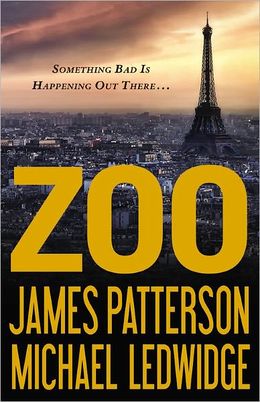 This is my first audiobook (well, apart from those terribly boring, cassette-tape ones of the Bourne something-or-other my Granny gave me when I was a teenager). I borrowed it from the library before I realized that I couldn’t download this to my iPod and actually take it with me in the car or something.

Audio (in this case via laptop) is okay as a format, I guess, but I find it annoying to have to find quiet times when I’m not too sleepy to listen, there are no kids around, and I don’t feel like doing something ELSE on my computer that requires sound or thought. it is fairly neat how the one narrator, Jay Snyder, can do a kid, a lady, various men, and some electronic noises effectively and undistractingly, but that isn’t enough of a draw. I miss the actual words on a page (or even a screen), I guess.

After several chapters, I realized I can crochet and listen to the book, so it started going a little faster. It does, however, annoy my husband terribly when I play this in the bedroom when the kids are FINALLY abed. I wish he’d just listen with me so I could do it with him around. No such luck. And, I keep thinking to myself, this doesn’t even feel like reading to me. It’s just not absorbing enough, or perhaps that is simply because the book was a bad choice.

Essentially, Zoo is about a modern-day scenario in which the animals around the world are being induced by a pheromone or brain chemical or something to attack humankind. And it has something to do with radiation from cell phones also. And, also, apparently some secretion put out by humans and human-caused pollution. It was all very confusing and not coherently explained.

Um, a smell and cell phones make animals attack? And, of course, only one college dropout understands what is happening? He calls this HAC (or, in its hokier longhand, Human-Animal Conflict), and bleh. I’d be done with this whole thing, except I’m only halfway through.

I finished it…still no better. The solution to the animals attacking mankind problem? Um, ridiculous and implausible. A two-week cessation of cellphone usage and power plants? Um, just no. And of course, people keep violating the orders, and blah blah blah. I think I’m over the audio format AND this book.

Like Loading...
This entry was posted in Contemporary, Fiction and tagged audio, james patterson, zoo. Bookmark the permalink.