This cover from the recent film is WAY prettier than the free Kindle noncover I personally have, so I’m including it instead… Also, this was going to be a “Two Dorks, One Book” post, but I think Kelley got caught up in her Wheel of Time series again…Maybe she’ll chime in later when she finishes Anna…Until then, here are my thoughts on my recent Anna reread. 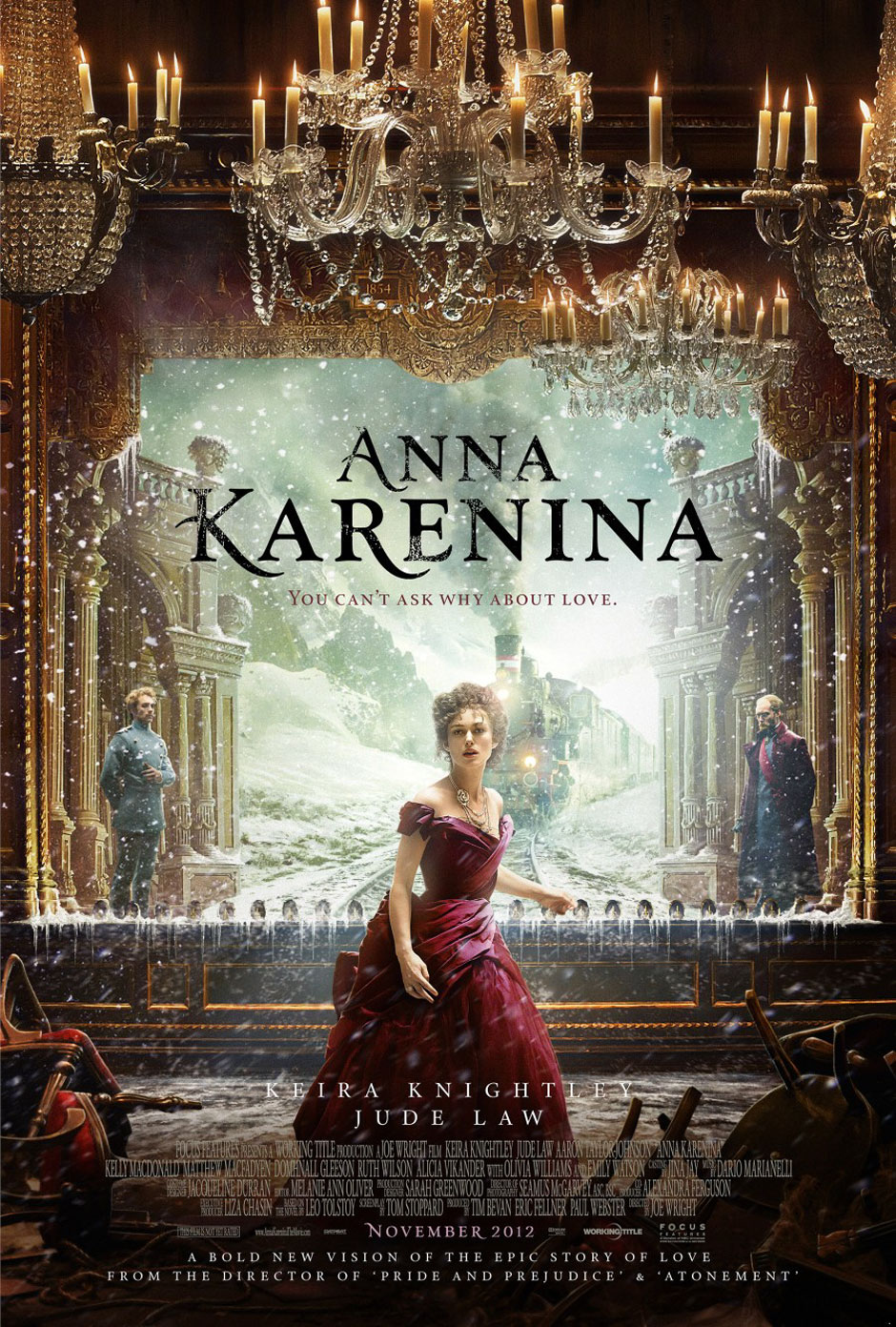 Is this a romance, a novel of social commentary, or a damn tract on how to properly take care of one’s Russian peasants? Too many things going on at once…I preferred the romance and how-people-fit-in-society bits, so I’m mostly going to focus on those aspects…

Man, Anna sure does mope around feeling sorry for herself a lot. How is it that no one noticed her desire to be center of attention before her scandal occurred? Why don’t we ever see what her life was like BEFORE her marriage and why doesn’t the pseudo-scandal leading up to her attachment to Karenin seem more central? I feel like that has a good deal to do with why they ended up so incredibly unhappy with each other, or did I imagine that? And, HOW COULD I FORGET that Vronsky was so psycho he SHOT himself? Why are these people so overly dramatic? Was it something in the food that Russian aristocrats ate? And really…the shooting plotline is really lacking, but throwing oneself in front of a train has to be the most unsatisfying suicide ever. Seriously…

About halfway through the damn book, I kept wishing for the train to come along and end MY misery! The political crap in the middle is just exhausting, and Anna and Vronsky’s continual struggle over her jealousy and his indifference do get on my nerves as they seem to be fighting the same fight every time we break away from Levin long enough to return to them.

Levin and Kitty are still cute here even in the boring middle parts that seem to focus heavily on their adjustment to married life. We can kind of see all along that Levin is looking for something to complete his life, beyond Kitty, and only a dope would not see that what he is searching for is religion. Poor Dolly, in all her brief appearances, seems sad and washed out. I almost hate Anna for convincing Dolly to stay with Stiva when I see how unsatisfyingly bland her life ends up, but then again, there are MANY reasons to dislike Anna.

I still cannot understand why she walks away from her first child (that would be a dealbreaker for me) and then ignores her new daughter. And seriously, did she just say she can’t look at little Anna because she looks like Alexey Vronsky, the man she LOVES???? Anna seems like a “grass is always greener” type of person, but it gets really old, really fast. I also feel she has some serious mental illness issues going on, and yet I also can’t help but feel sorry for her after she has made and committed to her bad choices. Anna Karenina is such a thoroughly wrenching perspective of how a person can wreck her own life without really trying simply by being too selfish. I still find Karenin’s passive-aggressive behavior somewhat weak and his weird psychic and fat old lady friend unnecessary to the plot. His final claiming of Anna’s daughter seems worth more of a mention. And once Vronsky goes on his quest to save Serbia or whatever after Anna’s death, I no longer care about him.

Finally, I have to admit that when you add in all the political crap, it gets a little tedious to read parts of this novel (I agree with Kelley; Tolstoy could have used a good editor!). There are too many extraneous characters and subplots going on here to complicate the issues, but overall, I still really like this book even if it is too long by half. Also, and I’ve always wondered this…why is it called Anna Karenina when it’s really Levin’s book????

Like Loading...
This entry was posted in Classics, Fiction, Pretty Covers and tagged classics, old favorites. Bookmark the permalink.