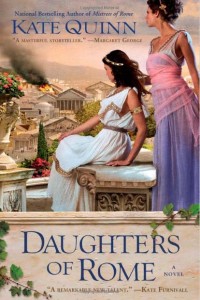 A.D. 69. The Roman Empire is up for the taking. The Year of Four Emperors will change everything-especially the lives of two sisters with a very personal stake in the outcome. Elegant and ambitious, Cornelia embodies the essence of the perfect Roman wife. She lives to one day see her loyal husband as Emperor. Her sister Marcella is more aloof, content to witness history rather than make it. But when a bloody coup turns their world upside-down, both women must maneuver carefully just to stay alive. As Cornelia tries to pick up the pieces of her shattered dreams, Marcella discovers a hidden talent for influencing the most powerful men in Rome. In the end, though, there can only be one Emperor…and one Empress.

About halfway through this book, I got tired of reading it and decided to search around to see if it has any redeeming qualities coming up before I decided to DNF. And APPARENTLY, this is actually the second book in a series, although it’s a prequel. And you guys, people LOVE the first one, Mistress of Rome. LOVE. And I don’t get it. Admittedly, I haven’t read the first one, but this one? Reads like a super boring cross between Melrose Place and the TV show Rome. It’s gossipy and tawdry and divorce-filled. As if that wasn’t enough, the “main” character is sort of a weird sociopath who goes around trying to get emperors killed for no reason at all. I thought the killings were a mistake at first until, about halfway through, she reflects on all the emperors she’s killed and plans to start killing the new one. WTF?

So I do have to say that the general feeling seems to be that the first book was great and this one was good but not as awesome as Mistress of Rome. AND, there’s apparently a big secret about one of the characters from the first book, that we learn in this book. So maybe I’d have enjoyed it more if I’d read them in the correct order, but right now, I’m DNFing this one.

One Response to DNF: Daughters of Rome by Kate Quinn