The One and Only Ivan by Katherine Applegate 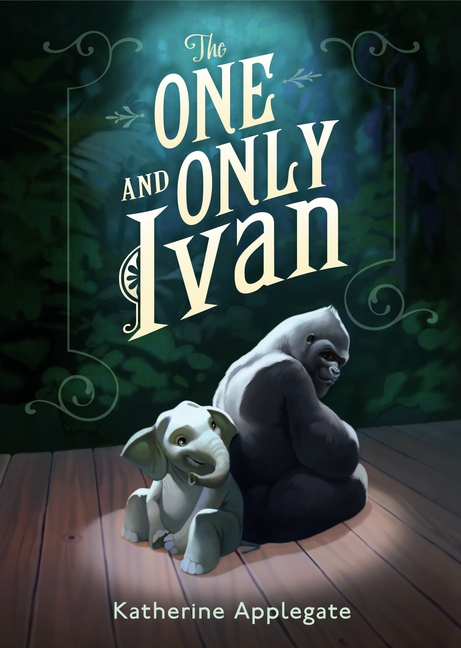 I’m going to try not to say too much about The One and Only Ivan because I’m anticipating another fabulous Guest Dork post about this one soon. But I do have to say, I really liked it. It’s weird, you know? I like reading books in lots of genres and lately I’ve been enjoying some newer children’s books with my kids. Some kid lit is just plain ridiculous, some is sappy, some is preachy and some, quite frankly, just reads like the author is trying too hard. Ivan manages to depict a realistic tale about the cruel capture and care of zoo animals without falling into any of those traps.

This is the story of Ivan, a mighty silverback gorilla who lives in a near-forgotten roadside zoo after being taken from his family when he was very young. Unlike his friend Stella, the elephant who never forgets over in the next cage, Ivan doesn’t remember much of his past except when forced to. It’s just too painful for him to entertain thoughts of his (now deceased) twin sister and his parents. You’d think that sort of story about human cruelty to animals would be depressing, right?

Except it isn’t. It’s kinda heartwarming because Ivan then decides to help out another young circus animal named Ruby. Ivan, who has spent years in the same enclosure finger-painting pictures of rotten bananas, throwing poo-balls to entertain guests, and watching his tiny TV, promises to protect the zoo’s newest baby elephant. After some initial reservations, Ivan decides this is exactly what he needs. After all, silverbacks are naturally protective creatures and Ivan has been looking for a purpose to his life. Embedded lessons against bullying and about keeping promises, making true friends, trying things that are hard, etc. can all be found here.

But, all that aside, the best part of The One and Only Ivan were the laugh-out-loud funny bits that I got to share with my ten year old. I promised I wouldn’t give those away here though because he wants to tell you about those parts.

Like Loading...
This entry was posted in Children's, Fiction and tagged children's, The One and Only Ivan. Bookmark the permalink.