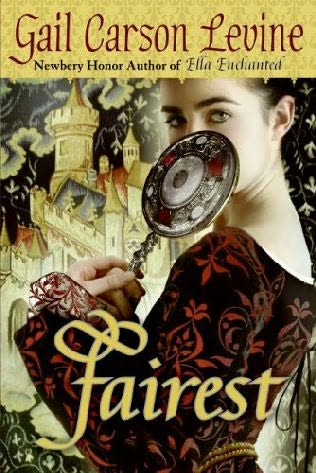 Fairest is a (very, very loose) retelling of Snow White. In fact, it’s so incredibly loosely based on Snow White that I kept forgetting what fairytale it’s supposed to be about. Our heroine is Aza, and she’s the adopted daughter of innkeepers. She was left in their inn when she was a baby, they raised her as a daughter, blah blah.

Now here’s a sort of interesting thing about Fairest: Aza is ugly. That’s quite a departure from other fairy tales, right? …Except that you know from the moment you find out she’s ugly that she’s not going to be ugly at the end of the book. Really, the ugly thing got pretty tedious, cause Aza was always whining about it. Of course Aza has a special skill though – she’s the best singer in the world – and she learns early on how to throw her voice (she calls it illusing). The voice throwing (an impossible skill for humans to perform, apparently?) is the basis for the kinda contrived conflict that comes later. There’s  also a queen who is jealous of anyone prettier than herself, and yet another poorly-written prince whose only real asset seems to be that he’s a prince. Yawn.

A weird thing is the whole singing aspect. The story takes place in Ayortha, which is next to whatever country Ella was from, and Ayorthaians sing everything, in a way that reads like very bad poetry. They run around having composing contests, singing to heal people, and singing randomly in normal conversation. It is weird and unnecessary.

The only things that I noticed that had anything to do with Snow White were the fact that the heroine had very black hair, very white skin, and very red lips (these were also the reasons she was ugly, BTW), and also a mirror that talked was mentioned a few times. Oh, and she did at one point get fed a poison apple, too, but that was so unimportant to the story that I almost missed it. Oh, and there are no dwarves whatsoever.

Despite all of my complaints, I like the way this author writes, and this was a quick, fun, lighthearted read. Retellings of famous stories fascinate me but sadly this wasn’t quite as good as Ella Enchanted.