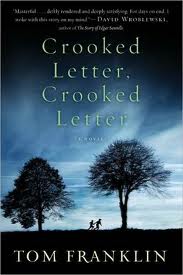 Ok, this is another one I really tried to like. It was a book club choice and it did keep my interest, progressed fairly quickly, and would have been strongly in the ‘like’ column except for three things: the fake-ass lower Mississippi dialogue, the predictability of the plot, and the incredibly poor editing.

First off, let me say I am all for creating believeable dialogue and appreciate an authentic-sounding accent here or there in fiction. However, I do NOT approve of creating Southern flair or lower class, regional, or racial dialects by changing words or deliberately misspelling them. For instance, writing “bobwire” instead of barbed wire is unacceptable. The same with egg “yokes” rather than yolks. That is just ridiculous. And “teefs”? Seriously… TEEFS???? Who, other than a two-year-old, says teefs instead of teeth???? At first, I thought it was just poor editing or perhaps that Franklin himself was just that bad a writer, but after so many mistakes, I have to believe it is intentional. And I don’t appreciate it. Southern people, black people, poor people, whatever-kind-of-people you are trying to stereotype here…they’re not dumb. They don’t deserve to be given dumb dialogue. Even if a writer is trying to develop a less-intelligent or “white trash” or “stringy” character (and yes, he DOES call them that in this novel) who he INTENDS to seem less-than-educated, it can be done sensitively. Sensitive this is not. This is craptastic, hit-me-over-the-head-with-a-brick un-classy.

Speaking of hitting readers over the head, we have the predictability factor. Of course the ostracized white boy is the bad guy who would immediately be suspected of raping and murdering a girl “too good” to date him. And of course she has a skeevy, abusive stepfather who is never suspected of any crime. And of course the lonely white boy is also dirt poor and under-educated and his dad doesn’t like him. And of course his only friend is the local black boy whose mother, a former maid, has some inexplicable connection to his family. And, OF COURSE the black kid is super-talented at sports, popular with white girls, and has no dad. And of course he has hunches that help him solve crimes related to his, uh-oh, secret-is-out HALF-BROTHER! And of course the actual murderer plants snakes in mailboxes, does drugs, and has a dog named John Wayne Gacy.

Add to all that some fantastically poor editing with the (intentionally???) sloppy writing and you get a novel I just can’t take seriously. (Really?: “Were their rental car places?” Because reputable publishing houses like Harper Collins really can’t tell the difference between there and their????) Ugh.

Like Loading...
This entry was posted in book club reads, Fiction and tagged book club, Crooked Letter. Bookmark the permalink.