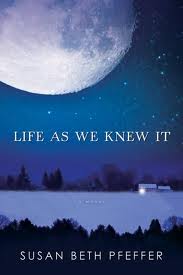 Life As We Knew It (2006) — One of my favorite YA dystopian novels, this one features a world gone wacky when the moon is shifted out of its regular orbit and too close to the Earth. Fictional climate shift, inevitable food shortages, and a worldwide flu pandemic remind readers just how unprepared we as Americans are for a real disaster. Narrator Miranda deals quite believably with the crisis, fighting with her family in close quarters, rationing food, and learning to survive without electricity while still pining for luxuries like proms, chocolates, and the internet of the world she once knew. It’s weird, ’cause as unlikely as it seems that a little asteroid could smack the moon off track, the resulting end-of-times scenario seems almost…likely. At times shocking, heartwarming, and frightening, but always disturbingly plausible, Life As We Knew It is a must read. And you know, you might want to stock up on canned goods and bottled water, just in case. 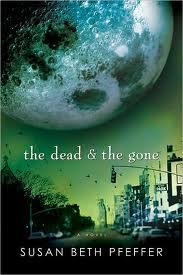 The Dead and the Gone (2008) — As compelling as its predecessor, The Dead and the Gone continues Pfeffer’s moon disaster series with a new set of characters in New York City. Similar to Miranda in the first book, Alex Morales must step up to care for his sisters throughout the crisis while hiding the fact that his parents are missing. I really enjoyed this one, too. Interestingly, when I first read Life As We Knew It a few years back, I remember thinking how much better off Miranda and her family would have been if they’d lived closer to a city, especially when all the medical crises started happening and they couldn’t get to the hospital. This sequel proves that certainly isn’t so as the city’s resources seem to run out much faster. Alex also experiences personal trauma right off the bat (I’m thinking of that horrifying Yankee Stadium trip) and his dilemmas (which include all of Miranda’s food and heating problems and such) seem that much bigger given that he’s just a kid alone dealing with it. At least Miranda always had her mom, and Matt, and even sometimes her Dad and Mrs. Nesbitt to help. She even got to be selfish sometimes and eat chocolate chips and ice-skate and stuff. Alex is ALWAYS alone and somehow more human and desperate because of it. Now, I’m off to book three when Alex and Miranda meet up after the moon anniversary. 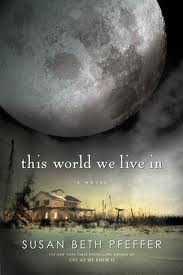 This World We Live in (2010) — No. Just NO. I thought for sure I’d love this one because the first two books in this series were just so darn good, but I was a third of the way through This World We Live In before I realized that the hyped meetup between our two main characters still hadn’t happened. With book three being the slimmest novel in the trilogy at 239 pages, this seemed like a waste. Too much time was spent NOT developing the story. And why do all the characters seem different in this one?  I mean, Matt never argued with his mom; that was Miranda. Julie is so helpful and responsible? Alex is joining a monastery? WTH??? And now, when things seem to be looking up (sort of), why do we have to add new characters no one cares about? I mean, why is Syl even in this story? (There had to be better ways to move the plot along and provide her one key bit of info.) And once Mr. Evans and the rest finally do show up, why is Alex so damn set on forcing Julie to go to the same convent place that nearly killed Bri? Why doesn’t anyone ever mention Bri? And really, the world is ending, y’all. WHY ARE ALL THESE KIDS TRYING TO GET MARRIED? And I get that the weather is crazy because of the climate shift and all, but really that was a damn convenient tornado. It’s almost as if the author decided, “Hmm, this book isn’t going the way I’d like. Let’s just kill off all the characters who never should have been in this book anyway and CONVENIENTLY let the principals survive.” And that ending with ever-so-selfish Miranda and super-lovable-no-one-can-live-without-me Julie?…just NO.

Damn, and I finally thought I’d get to do an all-good review for a change :/

Like Loading...
This entry was posted in Fiction, Young Adult and tagged Life as We Knew It, moon, Susan Beth Pfeffer. Bookmark the permalink.

2 Responses to The Last Survivors series by Susan Beth Pfeffer