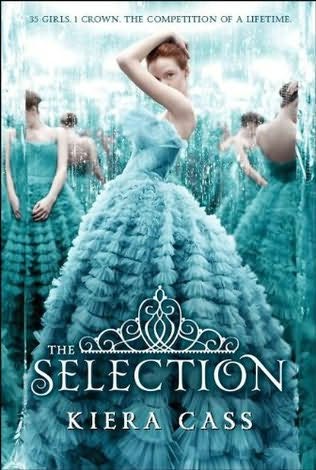 I am irritated. The whole time I was reading this book, I was composing in my head what I’d write about it here: It’s just so CUTE! It’s fun and fluffy and really just kind of adorable, and I enjoyed it more than any of the other books I’ve read in the past few weeks. I rather love America, I love the somewhat dystopian setting, and the cover is the most beautiful thing I’ve seen, like ever.

But now I don’t want to say any of that, because I’m MAD. I knew going into this that it’s going to be a trilogy. But I sort of assumed that something would HAPPEN at the end of this book – like, the Selection would end, or come to some resolution, or she’d make a love choice, or SOMETHING! But none of that happened. Instead here I am, anxious to get to the next chapter, I turn the page, and I see…”End of book one.” What. The. Hell. That is a TERRIBLE segue into the next book, seriously.

So the only other coherent thought I can come up with about this book is that I HATE this love triangle. Love triangles in general make me really uncomfortable, but they’re especially difficult when I kind of don’t want her to end up with either guy. I don’t like Aspen at all, and Maxon seems to have some jerky traits too. Maxon is running around secretively kissing other girls and giving them gifts? That’s going beyond what’s required by the game. And then he YELLED at her! And Aspen…is kind of a dick, freaking out over the meal she cooked him. He strikes me as an abuser and I kind of hope he dies.

Oh, I thought of one more thing I wanted to mention. I feel like there was a lot going on in this book. I think it could’ve been separated into several unrelated books, but with everything represented in this one, I just can’t really tell what the angle is. You know how you can usually tell if a dystopian book is going to end up on a really preachy note and make you feel like you should be recycling? Or a story might be themed A Heroine Finding Herself And Following Her Heart, or whatever. With The Selection I don’t really get what the theme is. There’s the Selection, which is worth a book in itself. There’s the caste system, which is also really pretty cool. There’s the mild dystopian angle (but it’s somewhat different, because so far there’s no evil government. It’s like happy dystopian). And then, there’s the mystery of the rebels and what they’re looking for and why the king is secretive, etc. It’s just…it’s all good, but it’s a lot, and it leaves me feeling confused.

So yeah, I enjoyed the book, I’m livid over the horrible ending, but I will read the next one. Just…that was not a book ending. Seriously.

Like Loading...
This entry was posted in Uncategorized, Young Adult and tagged dystopian, Kiera Cass, kings & queens, The Selection. Bookmark the permalink.

One Response to The Selection – Kiera Cass