The Snow Child by Eowyn Ivey

Finally, I can say I really like a book again. The Snow Child is charming and sad, as I expected it to be, given what I knew of the old Russian fairy tale it’s based on. Both deeply symbolic and surprisingly simple in its prose, I think this story will stay with me for awhile. 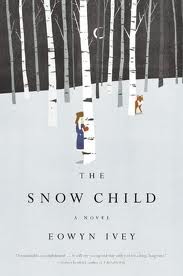 The premise: an aging and childless couple struggle to make their living on a homestead in Alaska but find themselves isolated and growing apart. In an uncharacteristic moment of playfulness, the depressed wife starts a snowball fight with her weary husband and convinces him to make a little snowman (which they later decorate as a snowgirl) before retiring to their cabin. The next morning, they discover the snowgirl gone, footsteps leading away, and the mittens and scarf they adorned her with missing. Not long after, they find an ethereal child who haunts the woods near their home. Over time, they earn her trust and learn to incorporate their two disparate worlds (theirs warm and indoors, hers icy and outside) for the winter, although she always disappears with the return of the Alaskan spring.

Faina, the snow child of the title, invigorates their lives with a new hope and they come to regard her as their own daughter. Alaskan winters are dark and harsh, however; no one else has seen the girl and the few neighbors believe the couple are just experiencing cabin fever. There is some question throughout the novel as to whether Faina truly is a fairy changeling, a conjured winter sprite created by their wishful thinking, or merely an orphaned child living off the wilderness, although that question isn’t really central to the plot. The novel becomes a story about the power of belief, the human capacity for enduring both grief and love, and the need to ignore worry and capture joy when it can be found.

Like Loading...
This entry was posted in Fairy Tales, Fiction and tagged fairy tale, Snow Child. Bookmark the permalink.

3 Responses to The Snow Child by Eowyn Ivey