The Scorpio Races by Maggie Stiefvater

Sigh…so we’re back to this: a book I’ve anticipated reading for quite a long time, even one I turned to as a welcome escape from the forced feeling of the Dragon Tattoo trilogy, has turned out to be a disappointment. 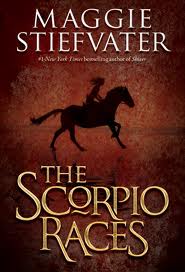 I don’t suppose The Scorpio Races was a bad book, but it just wasn’t my thing. First, let me say that I’ve never been a fan of horse stories. I never understood the desire to read Black Beauty, The Black Stallion, or those Misty of Chincoteague books my sister loved as a kid. I’ve never seen Secretariat or National Velvet.  I didn’t understand why one of the mandatory tour-stops in Vienna was the Lippizaner stallion show. I just don’t get horses. Still, this seemed like it would be a fun read: carnivorous horses and a beach race to the death? Sure thing, especially once I heard it compared to The Hunger Games.

This is the story of orphan girl Puck Connolly who is trying to win a yearly horse race for money to save her family home. It’s also the story of Sean Kendrick, also orphan-ish, who is trying to earn money to buy a monstrous water horse owned by his employer. Both kids are down on their luck and have something to prove. The exposition was overlong, the characters weren’t particularly compelling, and apart from Sean’s quest to own Corr (which he completely had in the bag, if you ask me, being a four-time winner), we have no story. Until Puck and Sean fall for each other…and I completely check out. (Sigh…see, I TOLD you I don’t like books!)

The plot is complicated a bit by Puck’s brother’s desire to leave the island, Sean’s employer’s son (a brutish jerk with no other identifying traits) antagonizing him due to jealousy, the fact that the horses are sea-mad man-eaters, and that only one can win the prize. Oh, and Puck is completely bucking tradition (ha, see what I did there!) by even being in the race with her normal pony, and Sean apparently has a magic “horse whisperer” touch with the crazy water horses and they MIGHT DIE.There are some unexplained minor characters (Dory Maud, Finn/Gabe, Annie, George Holly, Peg Gratton) who serve minor purposes in the plot but don’t seem important enough to care about. I never really did get why they even do this race, which seemed inhumane to human and animals alike, anyway. Tradition? Sport? Bloodthirsty natures? Or why exactly the scary flesh-eating horses only come out of the sea on this one tiny island, where they are trapped and pseudo-tamed.

I might have to take a holiday from this blog; the rest of the world is going to exile me because I don’t approve of books. Bring on the pitchforks!

4 Responses to The Scorpio Races by Maggie Stiefvater